[This story took place several decades back and at the time when there was only one main hospital ever built for all the inhabited islands of Kiribati. This hospital was at Abaokoro village on the island of North Tarawa. All patients with serious cases from the rest of the islands had to be admitted to this hospital for treatment]

An elderly man from the island of Arorae, the last island in the south, was admitted to Abaokoro hospital for treatment. Accompanying him all the way from Arorae, as a care-taker, was his own teenage granddaughter. [The story source left out the names of these two characters]

The granddaughter looked exceedingly beautiful and within just hours of their arrival, words of her beauty quickly spread out through the hospital, down into the villages and to the rest of North Tarawa. Considered a newcomer from a different island, people quickly nicknamed her the ‘new beautiful flower’. Many people, mostly young men, began visiting and staying at Abaokoro village; not for the medical assistance available there, but because of the beauty and presence of the granddaughter which they deeply desired. Every single one of these men had fallen in love with the granddaughter and could think of nothing else other than trying and wanting to win over her heart.

Over a month earlier, another young man had also been admitted to that main hospital for treatment. He was Marikiri, a patient from Makin, the last island in the north. One day, as Marikiri was lying on his bed facing his wide-open door, which he occasionally did, he suddenly saw a beautiful lady walked passed his room. The glimpse made him rush to the door to prove what he’d just sighted. Unfortunately, she was nowhere to be seen! She, indeed, had gone into their room which was just next to Marikiri’s. She surely was Marikiri's next-room mate! Without his knowing, Marikiri stood at his door for a while wondering if there could be another chance of seeing her again. Back onto his bed once again, he remembered something; the ‘new beautiful flower’ whom many people were still talking about. “Oh, I think I've known who that passer-by could have been!” his thought made him excited.

The very next day was one Marikiri would hardly forget. A day he came face to face for the first time with the 'new beautiful flower'! He sometimes was caught staring at her. "Yes, people are right. She really is beautiful as declared!" agreed the young man of Makin. And like what had happened to all the other young men who laid their eyes on the granddaughter, Marikiri instantly fell in love with her too. Approaching her to convey his love, but at the right time, was a challenge that he had to do next.

Thus, there was another young man, a sailor who had recently returned from working on ships abroad. He was from Abaokoro village and his home wasn’t far from the hospital. Having seeing and being around the granddaughter, ever since his return, the sailor had loved her so much that his ‘kabutiman’ (engagement proposal) was quickly arranged and organized by his parents and relatives.

During the ‘kabutiman’, the grandfather informed the sailor’s relatives, "I cannot answer you right now. I need to inform the girl's parents at Arorae of your proposal. I'll let you know of what they will say, once I receive their reply."

Few days later, the telegram arrived from Arorae. The granddaughter’s parents accepted the engagement request and added that the sailor had to come to Arorae if he truly wanted to marry their daughter.

Several days later, Marikiri received a letter from his doctor. The letter stated that he was fully recovered and had to leave the hospital, that very night, to catch the ship to his island. Even though Marikiri wanted to stay much longer at the hospital, he had no other choices. “It’s time to propose her for marriage. If she doesn't love me, then it will be fine as I won’t be here anymore!” he thought.

Upon hearing what Marikiri said, the granddaughter willingly accepted it with excitement. She openly told Marikiri of his handsome look; that she loved him so much and had been longing for his visit. In addition, she also noticed the sad look on Marikiri’s face.

After reading the doctor's letter, Marikiri gave her, she sadly insisted, "We have been in the hospital for quite long. Why did you propose to me during the last remaining hours of your stay?

"I'm so sorry that I am leaving this very night. Before I go, I promise that I will meet you again on the beach of your home island and on the morning of ‘te itingaroa’!” were Marikiri’s last farewell words.

Hours later, that night, Marikiri was on the ship heading back to his island.

Back inside their room, the granddaughter learned from her grandfather that the word 'te itingaroa' referred to; a stormy day with lightning and thunder, rough sea and wind. The grandfather stressed that it was just an old local word that shouldn’t worry her.

“Can Marikiri fulfill his promise?” the granddaughter wondered, knowing of the vast ocean that stretched for miles between their islands, and the stormy weather her grandfather had just mentioned.

Days afterward, the grandfather finally got well, so together with the sailor, they went home. On Arorae, the wedding was agreed to take place in three weeks’ time, therefore the preparation work began. Everything was needed to be ready before the wedding day!

At his home on Makin, Marikiri was busy preparing for the extraordinary ocean trip, he was about to carry out, and one that would take him to the island of the woman he still loved so much. He needed a strong and fast outrigger canoe; therefore he did a lot of work on his canoe. Could this rare sea voyage really take place? And if so, would it be successful? The answers would depend on both the level and reliability of the traditional sea navigation skills Marikiri had already possessed. Apart from being an experienced sea navigator, he was also brave and dedicated.

The remarkable voyage finally set off and went forth in this manner. Marikiri started sailing to Butaritari island, then from Butaritari to Marakei island, from Marakei to Abaiang, Tarawa, Maiana and onward through those central and southern lines of islands until he finally reached the island of Tamana; the last stopover before sailing the last route of his journey. Friday was the day he arrived on Tamana. 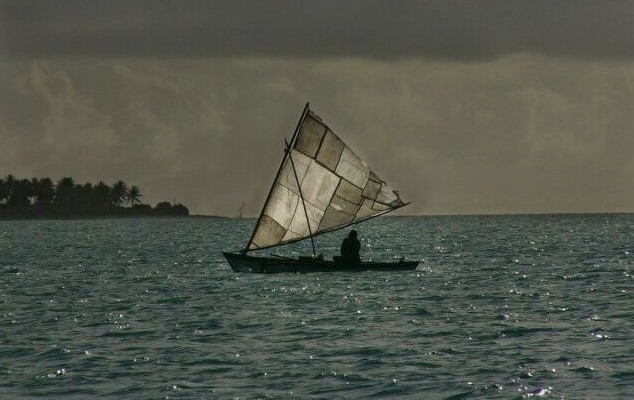 Later that same day, Marikiri got back onto his canoe and off he set on the final path of his voyage. Instead of arriving the next day, as he knew, the storm delayed his arrival time to the early hours of Sunday. Not sure what part of Arorae he had landed at, it certainly was the village. After roping his canoe firmly to some rocks, he walked up to the beach.

On the beach, Marikiri was seen by an old woman who often got up at dawn. She informed her husband, "Somebody is on the beach near the ‘bareaka’ (canoe shed)!"

"What is he doing there? Ask him to stay away from the shed," the old man replied.

The woman did as told, and down at the beach, she was astonished to hear a very different accent in the man’s voice. Straightaway, she knew that the stranger could have arrived probably from one of those northern islands. Seeing the canoe in the sea, behind him, she then guessed he must have been washed up after drifting in the ocean.

"Were you an ocean survivor?" she asked.

"No, I’ve travelled here to fulfill the promise I made with the lady of Arorae. My promise is to meet her again on the beach of her island,” he replied with the northern accent.

The old woman could not understand what the stranger had tried to say. Before she could invite him to their home, the husband arrived and interrupted, “So lucky you were washed up here. Come with us to the house.”

“Back in the hospital at Abaokoro, North Tarawa, I promised the lady of Arorae that I will meet her again, on the beach of her island and in the morning of a stormy day,” Marikiri included ‘te itingaroa’ in his words.

The old man remembered the moment his granddaughter asked him the meaning of ‘te itingaroa’ back in Abaokoro hospital. He then knew for sure that this stranger had come after his granddaughter.

“The lady you promised, got married just yesterday!” said the grandfather.

“I’m here only to fulfill my promise and not to interfere. Now that she had married, I then must go back. Please ask her of my request that I want to name her firstborn child. If a boy, name him with my father’s name. If a girl, then let her have my mother’s name.” and he gave the old couple the names of his parents.

“Wait, for she will be asked to come here!” said the old man.

The wife quickly ran to the granddaughter’s home, woke her up and asked her quietly, “Did someone promise to meet you on the beach and at dawn of a stormy day? He’s out there waiting for you now!”

The granddaughter jumped off their small ‘buia’ (raised sleeping house) and rushed towards the beach. The stormy weather outside brought back a fresh memory of Marikiri's promise back in Abaokoro. She just couldn’t believe the man had finally arrived and that she was about to meet him.

But Marikiri was in the sea, raising the sail to set off. The granddaughter cried out, “Marikiri, Marikiri!”

Marikiri instantly recognized that voice but there wasn't anything he could do. He only raised his right hand and shouted back, “Your eyes, to me, look like the lustrous pearl in the sea! Your face looks like the golden sunrays in the early morning horizon!”

Marikiri then slowly sailed away, until his canoe disappeared in the storm. And he was never seen or heard of again!

[Located in the middle of the ocean, somewhere between Arorae and Tamana, is a large shallow expanse of coral reef called Marikiri. It is named after the man in this story]